Recently, one of my students encouraged me to read the chapter, “Training in the Contact Zone: Power, Play, and Invention in the Sport of Agility,” from Donna Haraway’s book When Species Meet.1 I had previously read Haraway’s The Companion Species Manifesto so was already somewhat familiar with her accounts of agility training with her border collie, Ms. Cayenne Pepper.2 However, much as I admire the close collaboration of dogs and their “handlers” (Haraway prefers the term “partners”3) in agility trials, one of the questions Haraway raises in the chapter made me think more of animals that are not companion species.

You see, living in a place also inhabited by hummingbirds, I have come to wonder over the years how much they respond to human presence. We have had a hummingbird feeder outside our kitchen window for years and if the birds notice it is empty before we do, they will hover outside the window until we spring into action to mix more sugar water. I don’t know whether they hover because they are simply confused that the little yellow flowers that provided food yesterday seem to have dried up today, or whether they know that hovering outside our kitchen window will get our attention but, regardless, it works. They hover, they get fed. 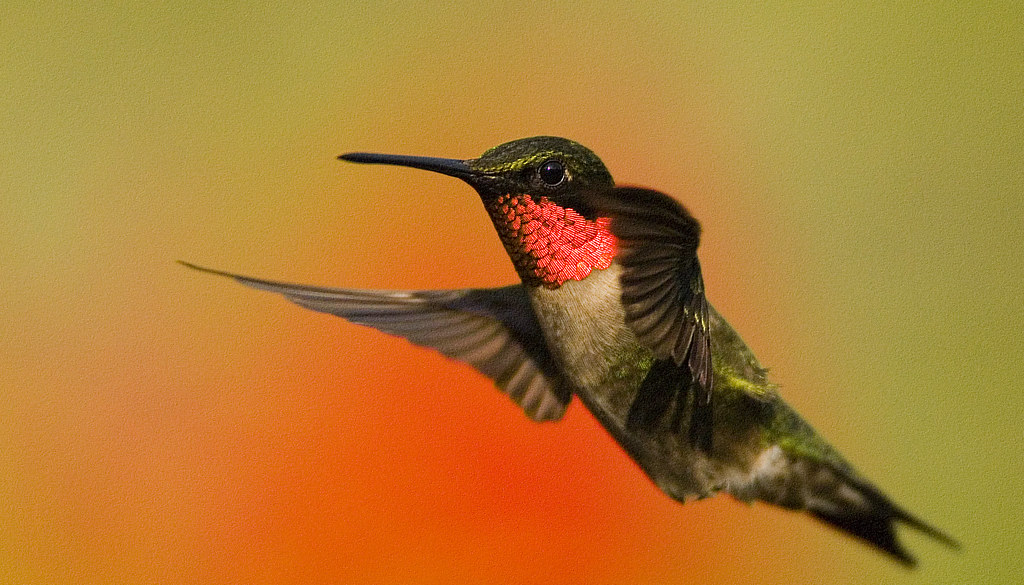 “Anna’s Hummingbird” by USFWS Pacific is licensed under CC BY-NC 2.0

When I am weeding or watering in the garden and hear the whirr of wings followed by the quick high note of a display dive, I have often told myself a hummingbird is coming to say “hello.” Truth is, I have no idea whether they perceive my presence as welcome, or threatening, or whether they are indifferent to me altogether.

I am not alone in marveling at hummingbird display dives. Briony Penn has compared them to a circus trapeze act:

First there is the diminishing buzz as the male climbs up the arc of the ellipse toward the sun. The buzz fades to almost a bee’s hum as he reaches the top of the ellipse, then there is a hummingbird’s breath-of-a-pause followed by the return descent. I don’t know if I can describe—with the greatest of ease—what it feels like to be directly under the nadir of an invisible trapeze carrying a circus freak in sequins.5

The researchers conducting the experiments had obviously learned to pay attention to hummingbirds, but the ways in which they paid attention, by audio-recording and video-recording hummingbird dives, and even setting up a small wind tunnel in a lab setting, was very different from the way in which Briony Penn had learned to pay attention to hummingbirds, lying on her back near the hummingbird feeder, gazing upward to watch the trapeze act. Did each of these ways of paying attention change who and what the human and hummingbird became together? Some of the hummingbirds in Clark and Feo’s experiments physically changed as a result of the interaction, as tail feathers were trimmed or plucked. (I was relieved to read that “plucked feathers regrow in approximately five weeks” but could not help but wonder how traumatic the entire ordeal of capture and manipulation was for the hummingbirds.) Were Clark and Feo changed as a result of their research, beyond the scientific knowledge they now had? In Penn’s interaction with the hummingbirds, the birds had clearly learned where Penn’s feeder was and Penn, in turn, describes refilling it. In addition, Penn, watching the hummingbirds in the spring, was clearly struck by the difference between the birds’ energetic flight and her own sense of depletion after the winter months:

“You are lucky,” I yelled at the ringmaster. “You just turn up in this currant patch after a winter down south, dressed to the nines in a costume of red sequins, then play host to some ‘greatest show on earth.’”7

In living with hummingbirds, humans and hummingbirds pay attention to each other in a way that changes both. We hang feeders and plant Red-flowering Currants, Crocosmias, and other flowers they enjoy, so that we benefit from their pollinating and the sheer enjoyment of their shows. They remind us when the feeders are empty, pollinate our plants, and perhaps even come to say ‘hello.’8

View all posts by Claudia